Posted on August 14, 2015 by Maura Satchell, contemporary artist and writer 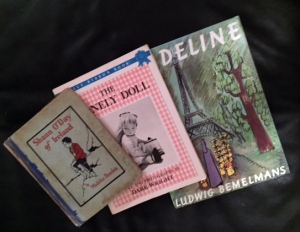 The books of my youth were so precious to me, I’ve still got them or found and re-purchased them!

I grew up the seventh of nine children in idyllic Packanack Lake, in northern New Jersey. My dad worked hard in the garment industry and later in the auto sector and he was the epitome of decency and integrity. No finer man has walked this earth in my mind. My mom was a petite fireball of a woman that managed to raise all us kids to become quite successful. She was ever curious and ready to tackle new things. I share with her a deep love of words since it was on her lap I first remember the joy and pleasure of books.

Hay foot, straw foot; The Lonely Doll; What are you looking at? Little Bear; Babar; and of course, Madeline were my favorites in those early years. In school, my first purchases were Rascal and Disney’s 101 Dalmatians.  I wrote my first poem at age eight, I think. It was dialogue between two people about a Grizzly Bear.

I don’t recall the rest. Suffice it to say, I discovered a joy in putting words together and processed so much of my emotions in that manner from that time on.

During middle school, we moved to Nashville, Tennessee where my dad opened an insanely high-end fabric store in tony Green Hills called the Sewtique. It was a hit for a couple of years and then fate and a store fire at neighboring Pier One (which at the time was more known for its baskets and exotic chocolate covered ants and such).  Fire damage would have been covered by the Sewtique’s insurance policy but smoke damage wasn’t. Alas, who wants to purchase three yards of smoke-scented dotted swiss?

The store went under but rather than filing for bankruptcy and erasing the debts, my dad (of the tremendous integrity), held a fire sale, took out personal loans and assumed the debt personally. I think it was around that time I was burned, too. In a kitchen accident. I spent five weeks in Vanderbilt Children’s Hospital recovering from the third-degree burns to my legs. The bright spot during that time for me was having so much attention from so many people. I flourished if you can imagine. To while away the hours, Mom would bring me a new stash of library books each week.

After the store disaster, we moved to a fabulous old 15o-year-old antebellum mansion in the country owned by the Tennessee Orphans Home. It had been bequeathed to them with the stipulation they could never sell it. My older siblings recall the drudgery and clusterf*ck of it all. I only recall the romanticism of it all. The 240 acres surrounding the property were leased out to a local farmer who also owned a Tennessee Walking Horse that was ours to use whenever we cared to. It was fabulous for a middle-schooler with an active imagination!

Television channels weren’t strong out there so entertainment again meant trips to the local Franklin Public Library where I discovered Trixie Belden mysteries. And then, Laura Ingalls Wilder graced me with her Little House series. I was hooked and never looked back.  Because we lived six miles out of town, organized sports and other activities wasn’t really an option, so I spent my pre-teen years playing in the fields, riding the horse, attempting to catch fish with a makeshift pole, and reading. It was a great respite from school where I was bullied for being different – northern accent amidst these rural folk, and visible scars on one leg below the knee didn’t help.

Stay tuned for part two of my “story,” when I discuss adult years reading, writing and how I “fell” into making art.

But before you depart, tell me: What were your favorite books as a child?

Contemporary artist, seeker, writer. Curious to a fault. I let the fates take me where they will and never say no to an adventure. That has led me on some heart-stirring journeys and impetuous choices. I regret nothing.
View all posts by Maura Satchell, contemporary artist and writer →
This entry was posted in Uncategorized. Bookmark the permalink.